Part 1
When someone thinks another person is being unjustly or at least overly accused of wrong-doing, they may compensate with a defense of the accused that is excessive. In their minds they are righting an injustice or at least trying to get the judgment (by others) closer to a middle ground. It also strikes me as very possible there is something in the scenario or in the accused person that they relate to; maybe they too have felt what they thought was unjustly accused in the past and this situation could be seen as an indirect opportunity to right the wrong done to themselves, sort of by proxy. Extreme reactions, even if well-intended, usually have their roots in our own personal experience.

Part 2
When I was a little girl my family watched the musical Oklahoma on TV. In the film, ranch-hand Jud is depicted as a brooding, disgruntled loner, the quintessential outsider living in a hovel on the grounds. He’s seen doing questionable things, including making a play for the virginal Laurey, almost forcing himself on her. In the movie’s penultimate scene, newly married Laurey and her husband Curly are atop a hay stack, having been marooned there without a ladder by rambunctious wedding guests. Jud, who has apparently gone from disgruntled to psychotic, sets fire to the haystack in an attempt to burn the young couple alive. I was horrified by the scene.

While watching the film, however – at least before this attempted homicide business – my father defended the Jud character! I was shocked by such a strange response; it was as if he was watching a different movie. He felt Jud was maltreated by the others. He wasn’t trying to impart any lesson to his children; rather, as was the norm, he was just reacting and I happened to be there. I already had a strong sense of right and wrong (which, by this example, it’s pretty clear I didn’t entirely get from my parents) and my opinion of the character didn’t change. Now I can articulate that growing up my father felt like an outsider who was judged by others, at least in part for his Italian ethnicity. In his mind I expect he saw himself in Jud and related to the character, the unpolished, marginalized outsider.

In fact, my father specifically continued to believe others harbored prejudice toward him and Italians far into his life. In reality it wasn’t so. Nobody called us “wops” or cared a whit that we were a half-Italian family and moreover, as a Northern Italian (fair skinned, blue-eyed), my father did not resemble the typical swarthy Sicilian stereotype people usually imagine when they think of an Italian man.

Leaving the Italian aspect out of it, by the time I was born and knew my father, he was long-married to a pretty wife, my mother, with several children, had a good, white collar profession and was established in the community and in our family’s church. His life did not resemble Jud’s at all. That he related to and defended this dark, unpleasant character who, so far as I could tell, brought most if not all of his troubles on himself, left me disturbed and baffled. In retrospect I consider it very revealing.

People don’t wink much anymore do they? There are certain days I feel like I go around winking at everybody (not every day or even most), at men and women alike. Winking is flirty and conspiratorial. A younger man winked at me last week. It wasn’t lascivious, but charming actually in its context, and even though I was kind of surprised I took it as friendly/flirty/harmless. It occurs to me that, similar to raising an eyebrow, winking might not be a gesture everyone can physically do. Moreover, I’m sure plenty of people are not comfortable doing it – I’m having trouble even thinking up people I know who DO wink.

People are often resistant to learning that someone else is not quite what they seem, particularly if they personally haven’t either witnessed or experienced any negative behavior and/or have an investment in continuing to see the person in point in an untarnished light. Most everybody likes to think they are a “good judge of character” but not everybody is and the suggestion the wool has been pulled over someone’s eyes or they’ve been had hurts people’s egos. It is very unsettling to learn things are not as they appeared and, if they allow it, can cause someone to question not only their own judgment but other situations and people, which can feel like a loss of control and autonomy.

You know who I want to cook for me? Canadian chef Michael Smith. I never heard of him until the last year when I’ve turned on the TV and flipped around (or rather pressed) the channels and occasionally came across his show “Chef at Home” where he is cooking in his (very nice) house. That kitchen!! Be still my covetous, hungry heart. He has this pantry stocked with glass jars filled with every kind of seasoning or extra you might want. There are always fresh ingredients in his refrigerator. He never opens something up, sniffs, and says, “What was THAT?” before tossing it in the garbage.

He talks about food and cooking while he works and makes it all sound so accessible. I can cook but I don’t want to go to a lot of trouble. He, on the other hand, always makes a proper meal with several sides AND a dessert. In the shows I’ve seen he is usually cooking for his wife and little son, Gabe. (Gabe eats the food happily and doesn’t throw tantrums or spit it out although editing might have a hand in that.) The food looks wonderful and did I say I love the way he talks about it? He’s practically giddy over the dishes (just like I’d be).

It isn’t that I want to be on a DATE with Michael Smith while he cooks for me (it’s not like that); I just want him to cook for me.

I only noticed last week that the shows I’ve been watching are from 2005! So when I googled him now to see who he is and look him up on Facebook, I was surprised to see this guy with a graying beard. But then, 11 years have passed. It threw me off though not unlike when I was a kid and watched Shirley Temple films – I was really surprised to learn she was this older lady named “Shirley Temple Black.”

I would not have guessed Smith was Canadian; he’s got a Seattle kind of vibe about him or maybe California (although the house and grounds looked vaguely like New England to me). He reminds me, in looks and demeanor of the character John Corbett played on Northern Exposure, the laid-back DJ guy, although Smith isn’t so laid back as that. Anyway, apparently he’s quite famous. So I don’t think he will cook for me.

I’m an outdoors girl. I delight in being outside and hate being cooped up indoors for long periods. I love to have beautiful plants and flowers around me. I look at them the way I would a painting or a decoration. It’s satisfying in that same way. Maybe the more so because the objects of my gaze ate temporary, seasonal. The garden is a canvas, a piece of art. Pretty things, in this case living things, just make me happy.

A mystery vine turned up mid-summer and I’ve been thoroughly enjoying it. It just came up in the mediocre herb bed which happens to be located next to my seasonal screen tent this year so it had somewhere to climb. The leaves look like morning glory which I’ve seen with big purple flowers. These tiny white ones are not familiar but I looked into it and there’s many, many varieties of morning glory so maybe that’s it.

A vine like this could be a big nuisance and problem if there were LOTS of them – I’ve seen places overtaken by vines – but just this one showed so I let it be. It’s kinda funny because I wanted a flowering vine this year but I never bought one. 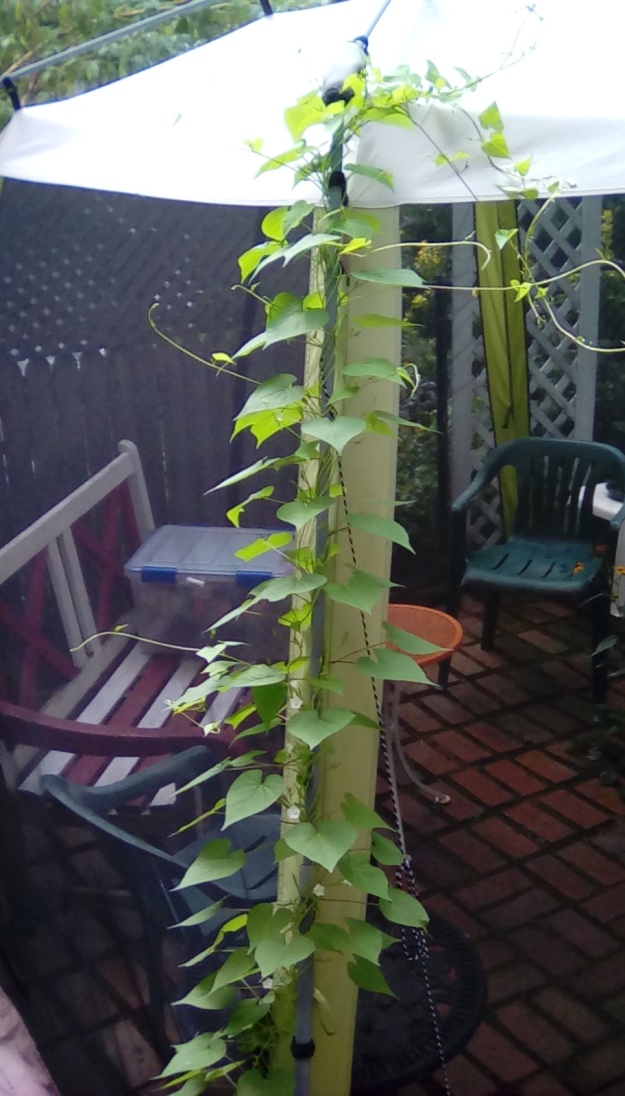 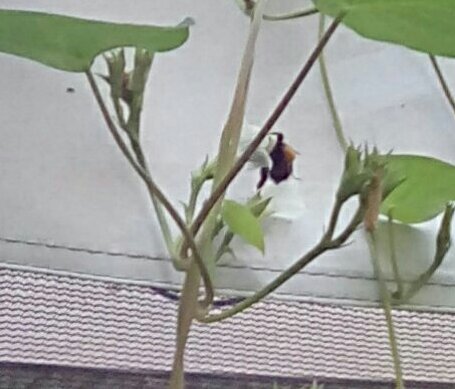 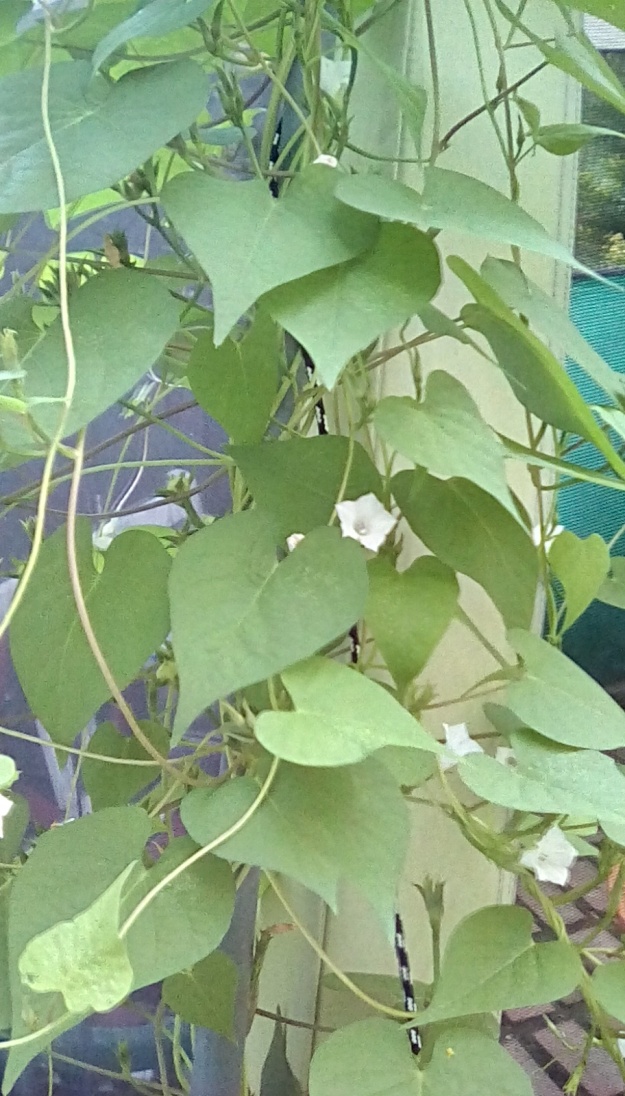 Not pictured but the little blooms close at night, so sweet