I look at what other people wear, men and women alike. There’s an older woman I don’t know but saw occasionally. She was spirited and in great shape but I thought to myself that she dressed “too young” for her age. Then I learned her actual age. It was decidedly older than I’d have guessed, one that by the books is undeniably senior citizen territory. My judgment evaporated. If she looks like that at that age, I thought, she has earned the right to wear pink tutus and Hello Kitty barrettes or purple glitter nail polish and beanies with spinner propellers if that’s what she wants to do.

Did you know this? I discovered it by accident several years ago when I decided to wash a dusty pine cone. The cone had been on a shelf for years and I dunked it in water as I did again yesterday.

But look what happens after it sits out on the counter overnight!

How did I not know this?! A pine cone, even one long parted from its original tree, closes up when it gets wet. After it dries out, it returns to the original open state. I don’t know about you, but I was very impressed with this bit of magic! I mean that’s the sort of thing which would have fascinated me as a child, had I known. After the first time I washed this pine cone I started noticing that random pine cones on the ground outside did the same thing. Huh!

The word kale used to make me shudder. The way my mother served it when I was a child was to blame. My memory of it was a bitter, boiled, unseasoned soggy mess that pooled discolored water on your dinner plate which floated over and infiltrated the other foods, a further insult to trying gag the vegetable down. It was a LONG time before I went near the stuff again. It’s good I did because kale is nutrient packed (high in fiber, Vitamins A, C and K with lesser amounts of protein, Vitamin B6, calcium, folate, magnesium, copper, potassium and iron) and it does not have to be disgusting!

Kale is a cool-weather annual and tastes best in season. My opinion is that kale grown in warmer weather is more likely to be(come) tough and bitter. It should be a beautiful deep green. If it’s yellowing it’s old.

I took a kale chip recipe and simplified it. I am ALL for short cuts in cooking. First I wash the kale. I use my salad spinner and break it up into roughly bite-size pieces, tearing off the toughest, thickest stems closest to the bottom. If you want an extra step, you can first put the kale pieces in a mixing bowl but I put them directly onto a large cookie sheet. I add a capful of canola oil, a capful of cider vinegar, a bit of cayenne pepper and a little coarse sea salt and mix them up so that all the kale is coated. Adjust the seasonings to your taste; I love spicy/hot but if that’s not for you, just eliminate the cayenne. I’ve just discovered the easiest way to mix is by hand (it keeps the kale from leaping off the cookie sheet) but a spatula works too.

I cook the kale in a 400° oven for about 15 minutes, stirring a few times. The goal is crispy but not burnt so it’s important to keep an eye on it. A higher oven temp speeds things along but necessitates more stirring as we aren’t aiming for carcinogenic kale chips.

Now I’m not gonna kid you. These aren’t anything like potato chips but they DO have a delicate, satisfying crunch. Completely different from steamed kale, say. This is now my favorite way to cook kale. 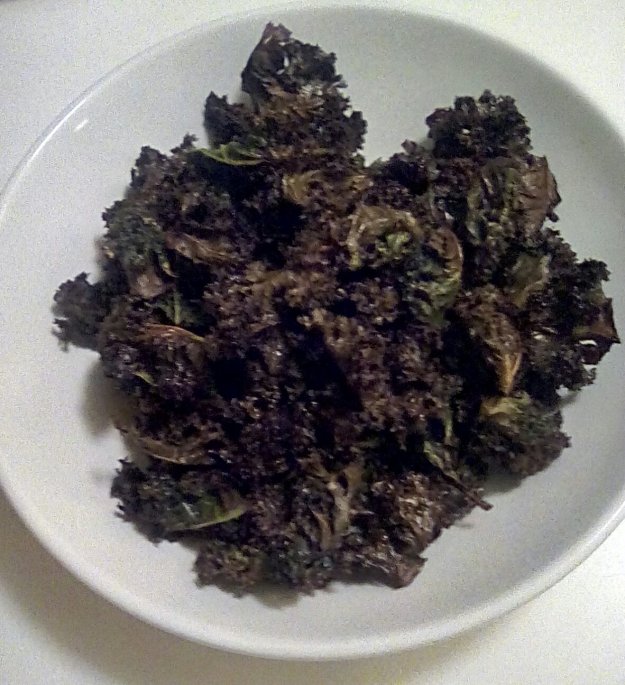 Isn’t that pretty? And nothing is floating around!

He was a middle aged man I talked to occasionally when I saw him here or there, but we didn’t have a social relationship. I had on several occasions listened to his stories. He was very smart and a bit eccentric. This one day I ran into him and he started telling me about visiting a woman friend and her 18 year old daughter. Then he told me about how the young woman had taken something of his and he had wanted it back. So he said, he had to “beat her up a little bit” to get it. I assumed he was just joking, using a turn of phrase to illustrate a story. I didn’t react. But then he made a point to repeat it, to say just that phrase again, that he’d had to “beat her up a little bit.” Now I was listening differently. I could tell he wanted a reaction from me – hence the repetition – and that he was kind of pleased with himself.

I was appalled. I suddenly had a visual of this solidly built man strong-arming a young woman. Frightening her, maybe even hurting her. The scene went from inconsequential to alarming in my mind’s eye. I’d never challenged him before, not seriously, but this couldn’t pass. “If you put your hands on an 18-year old girl for any reason that is a reflection on you,” I said levelly. He immediately became defensive. Clearly, my reaction was unexpected. He became agitated, raising his voice, insisting to me he wasn’t going to let someone take something of his.  I know an argumentative tactic when I hear one. I’ve been listening to men say things like this all my life; the what-else-could-I-do excuse. As now, they get mad at you for pointing out they did wrong.

I was uncomfortable but kept my voice the same and repeated exactly what I’d already said. Instead of backing down, he clung to his position. I knew far better than to say things like “You could have called the police” or “You could have taken her to Small Claims Court.” People in this mode aren’t interested in solutions. They feel called out, embarrassed possibly, especially because a story meant to amuse you, their listener, or to at least get a positive response, has backfired.

Once someone starts raising their voice (to me), they are not listening. Moreover, once someone starts raising their voice to me, my time with them is over. I moved along that day and haven’t stopped to talk with him since. He revealed something about himself to me in that conversation that I wanted no part of. Putting his hands on the young woman was bad enough but repeating it to another woman he ostensibly liked – assuming I’d see his point or take his side – compounded it. He had an opportunity to reconsider when I challenged him, but instead he chose to defend his position and in doing, alienated me.

Most of the time I cook healthy meals for myself. On those sporadic occasions I’m tired or otherwise uninspired I have a quick, alternative go-to dinner: a big bowl of stove-popped popcorn, accompanied by a side bowl of cooked frozen okra with a dash of olive oil and a little coarse sea salt. Right there I’ve got my carbs, whole grain, a vegetable, and healthy fat plus if I’m feeling frisky I add shredded cheese to the popcorn and bam – there’s protein and dairy. Now, if I end this repast with a piece of fruit like an apple, I’m pretty much covered.