When I find a bottle, typically a liquor or beer bottle, tossed on the ground somewhere, and I’m in the general vicinity of a trash can or on my way home, I’ll pick it up and carry it with me to throw away or put in recycling. I want to squash the opportunity for some asshole to come along and smash it, putting bike and car tires at risk as well as pets and children who don’t know better than to avoid broken glass.

Here’s the thing though. I carry any such bottle very deliberately. First, I’ll empty out whatever contents might still be in it and then I typically hold it upside down and away from my body so as to project: This isn’t MY bottle, no sirree, in case anyone is wondering. Just a good citizen here, not a person strolling down the street chugging on a 32oz Colt 45 in the middle of the day.

My body is staging a coup. After three weeks it flatly refuses to quit Daylight Savings Time. So far as eating, sleeping, etcetera, it’s sticking with the old schedule thank you very much. Sure, my body grumbled in years past about this awkward biannual clock changing business but never put up this much resistance. Now it’s all  “Hell no, we won’t go …off Daylight Savings Time.”

Way back in March I found an interesting, small metal wall shelf for a buck at a rummage sale. I stuck it briefly on the wall for the purposes of having show-and-tell pictures in that post but after that it languished on top of the fridge, waiting for a permanent home. See, I’m running out of wall space and I didn’t like it the one or two spots I tried hanging it. So for 8 or so months I’d eye it and it bothered me! I needed to leave it out so I wouldn’t forget about it.

Perhaps the cool Fall air has invigorated me – I kind of think it has – and I’m feeling creative. It occurred to me to try an unconventional approach and go UP the wall nearer the ceiling with it. Bam! It works.

I tried a couple different things on it and liked this white vase (a curbside find I picked up primarily because I thought it didn’t deserve to go to the landfill). Also, notice how the shelf metal matches the color of the hanger below it. A word on that copper(?) hanger. It’s actually some kind of construction equipment I found, again, tossed out (that is I didn’t rifle around a construction site and pilfer it, okay). There were two and I salvaged them because I thought maybe I could do something creative. 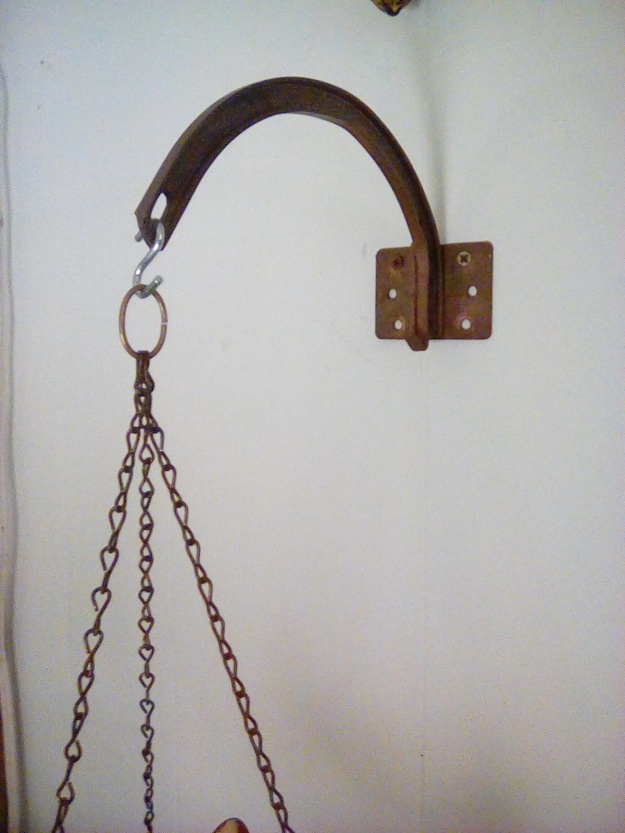 The glass dish, which I think is vintage, was one of several items I got when the local arts theater gave away a bunch of old props they no longer wanted. I don’t know what it is,  I just thought it was cool. Occasionally I burn a tealight candle in it.

Now you need to see the shelf in context. Since I last posted pictures the couch gained two new thrift store throw pillows, the lighter ones. Also, you can see how the metal shelf picks up colors in the painting as well as the pillows.

And on the right let me reintroduce the bird cage thingie. It hangs from the other salvaged hanger. I decided the two hangers didn’t need to be matchy-matchy, which really isn’t my style.

And finally, a different vantage on the whole wall and area. I am really liking it. Colorful and inviting.

So. I notice things. I draw connections. Sometimes they are hard to miss. For some time now, often enough to be noteworthy, when I am alone and  have a bad thought about somebody, something bad promptly happens to me. I will think or say to myself, “Such and so is a selfish loudmouth” and immediately I accidentally break something of mine or knock over a plant. It’s weird. And it’s irritating!

For example, yesterday I had a specific bad thought about someone and no sooner than I did I knocked the last piece of my homemade cranberry/walnut bread that I was having for breakfast onto the floor, honey-side down. I knew I hadn’t cleaned the floor where it landed (behind a chair) in the last few days so there was no saving it.

This is a recent, perhaps for the last year or two, phenomenon. I think I would have noticed if it had been happening earlier in my life. Do know that I tend toward a skeptical, analytical nature, so I consider other ways of looking at this. Perhaps I am simply having bad thoughts about other people more often so it’s just a matter of chance that bad things sometimes happen to me in tandem, after all it’s not as if bad things don’t happen also for no apparent reason. Lord knows I’ve been breaking mirrors and stubbing my toe or running into corners all my life (same as I figure most people do). But I don’t think there’s been an increase in my bad-thought-thinking and if there is, it’s not a big one. I mean it’s not like most of my life I only had sunny thoughts about other people and only recently began having negative ones. Um, no.

Maybe, I considered, at some level (unconsciously?) I believe that having bad thoughts about other people is wrong and I should change it. But that doesn’t really seem true because I am resistant to these “reproaches” and have started to argue back out loud. I have a surly thought about someone, something bad of a fairly minor nature happens to me (I break a glass or accidentally whack my head on a cabinet door, something like that), and then I argue. “Well, it’s true” I sometimes say to the empty room. I’m sticking to my guns, such and so is probably a sociopath. Then, nothing.

This also happened recently. In late summer/early Fall I couldn’t find my edger, which is a long-handled, manual garden tool. I knew a woman of my acquaintance had given it to me (I garden so it was not an unusual thing for someone to give me). I hunted everywhere, multiple times. I even told someone else I was looking for it. I don’t have a lot of stuff, nor do I a lot of storage space. It couldn’t get lost. I looked over a period of days. I could visualize it, exactly where I kept it. Where was my edger? I couldn’t have given it away, I was certain I wouldn’t have done that. It really bothered me. I am pretty organized; I know where my stuff is.

Roughly two or so weeks later, the woman who I was sure had given me the edger offered me an edger. My mind was blown. This was not a second edger, it was THE edger. Evidently, I did not have one. I said nothing to her about being convinced she’d already given me one; she’s a very matter-of-fact person, not given to any kind of whimsical, mystical, or otherworldly thinking. Had I told her I had a premonition about her giving me an edger she likely would have suggested my mind was slipping, not that I’d had any sort of extrasensory experience.

I’ve had little stuff along these lines happen throughout my life, but this one was stronger. I could see the edger, knew where I kept it – before it existed. I didn’t think I had it, I knew it. It’s somewhat bothersome because I put such strong stock in what I know and believe is true. And convinced as I was, I was wrong. I was sure of something which hadn’t yet occurred.

And what an odd, mundane thing to have a premonition about…An edger?!?

A long time ago I dated a Native American man. He told me Indians didn’t really celebrate Thanksgiving. I could see his point.