This happened many years ago. All the kids in my family were grown but we still congregated with our relatives at out-of-state family reunions. One year the big reunion on our mother’s side had been held at a park but in the evening the group continued the festivities at one of my cousin’s homes. People had begun telling jokes. My brother, in an animated fashion, told a detailed, moderately racy joke that was greeted with much laughter after its punchline. 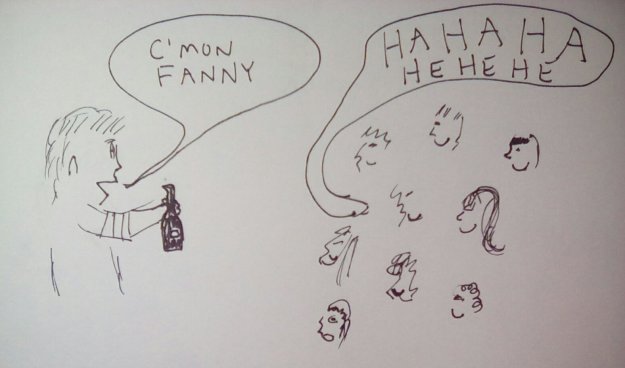 My sister, on the other hand, told a short joke:

“Why is American beer like having sex in a canoe?”
“Because it’s fucking close to water.”

This joke didn’t go over quite so well. Perhaps because my sister had failed to think about the fact that we were literally in a town that made an American beer, one much beloved by the locals. 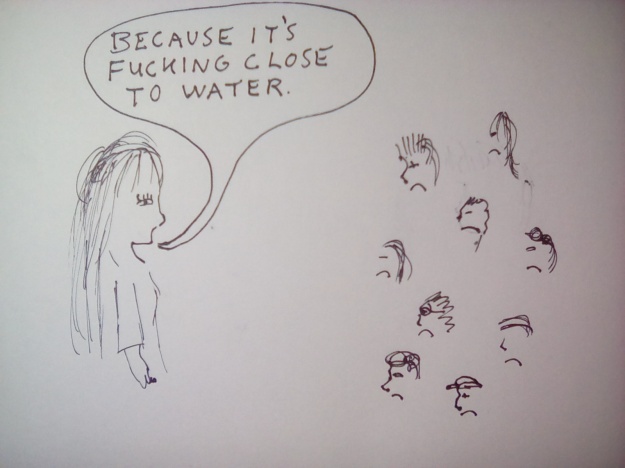 When I was around twenty, my older brother was dating a younger woman who was closer in age to me and my slightly older sister. She was a wild gal, up for anything, the life of the party. She had a headful of naturally curly blonde hair and a husky voice which, as a real talker, she used a lot. She played the guitar and sang beautifully, a gift I have always admired. That year she joined my brother at our out-of-state family reunion, an event known for hard partying and drinking into the wee hours. The next day when most revelers were hungover and hurting, I can still see her – despite having been drinking with the best of them – springing about, bright and early, looking good, and ready to go. I wondered how she did it.

The relationship between her and my brother didn’t last but my sister and I still saw her for awhile. One time the three of us went to the local dive bar. We sat on stools at the bar proper, and over beers she decided to share intimate details of either the last or one of the last times she’d been with our brother. While in bed he’d criticized her lack of uh, enthusiasm, accusing her of “lying there like a wet noodle.” This was information my sister and I never needed to know and I’ve never been able to forget.

For a few reasons, we didn’t ultimately stay friendly with our brother’s ex but I knew she went on to settle down and have a little family, two daughters who looked like her; I saw them as children once at the public pool. But that was long ago. I learned recently online that she’d died. I was sorry to hear this, especially for her children and family’s sake. I will always remember her, though, not as somebody’s mother or wife or as a middle-aged lady but as that wild child who animatedly told us a little too much one day at the bar.

When I was a kid, grade school age, I read a quote from a guy in a band in what I remember as Tiger Beat magazine. I don’t remember the name of the guy or his band but I’ve never forgotten what he said:

Whoever invented the bed should be given a medal.

What a funny thing, I thought, for an adult (a guy who was likely, in retrospect, in his early or mid-twenties) to say! Since I didn’t know about sex, I almost certainly didn’t interpret the quote in that light. I’ve thought often of his words and the older I got, the more I concurred. Again, not because of the sex angle either. I just think beds are grand! I feel so lucky to get to sleep in one. I love my bed.

I remember when I was in my twenties, telling my sisters I called it “The Happy Bed.” I’d climb on in and smiling, would say this to myself as I snuggled down. The Happy Bed. Later, one of my sisters told me she’d tried it but said – somewhat accusingly I thought – it didn’t work for her. I wasn’t sure why she thought it would; those were my feelings about my bed.

This thing we humans do – laying down to sleep is kind of strange. What if we slept upright instead and merely stood there like some animals? We wouldn’t need beds, perish the thought!

One of the few things I miss about the winter season once it’s passed, is burrowing under a pile of blankets in bed. That is one of life’s most delicious sensations. I wonder from time to time, if it’s at all related to being in the womb? An unconscious reminder? I have no idea.

What pleases me to no end is that we have to get in bed and go to sleep. It’s not optional. No, I’ll never be one of those silly people who say they’ll sleep when they’re dead and consider time spent in bed a nuisance that cramps their style. On the contrary, it’s one of my favorite places to be. A medal to the inventor indeed! Bed I salute ye!

My oldest brother moved out of the house – after a history of increasing unpleasantness between him and our father – when I was a child in grade school. Our family was rather conservative, religious, and conventional. My brother, who was artistically inclined and never the rough-and-tumble son our bullish, alpha father would have theoretically wanted, was having a go at the hippy life much to my father’s disapproval. I’m sure my mother didn’t think much of his lifestyle either, but this was her favorite child and she saw it as her role to run interference between the two, albeit not very successfully, so he got a pass in quite a few things. Still, my father ruled the roost and rebellion was not well received, especially the counter-culture kind.

My brother left after one last ugly conflict, of the sort where I was awoken one night to hear my father and brother shouting at each other on the front lawn, coming to – or about to come to – blows (not for the first time), while my mother hollered at them to stop, saying “the neighbors would hear.” Laying awake in my trundle bed in the room I shared with my sister, I was so scared.

He moved into the city and lived in a group house with his girlfriend and roommates. After a little time had passed and enough smoke had cleared, our family, that is, my parents and their three youngest children of which I was one, went to visit. We put on our church clothes for this little foray. Father in suit, mother and girls in dresses, little brother combed and cleaned up, the whole bit. And drove to a sketchy neighborhood downtown where the big old rental house was located. My life was a sheltered affair; I found the whole thing shocking, from the fact of my brother leaving us to his new arrangements. Group house? What is that? When my brother pointed out his room that he shared with his girlfriend, I took note of the solitary mattress on the floor. Mattress on the floor? Just one?! What was this?? I didn’t know about sex, not at that point. I just knew something was up.

We sat, in our good Sunday clothes, in the dark, high-ceiling living room and made small talk with my brother. It was uncomfortable. There definitely wasn’t anything for children to do there. From the outside, we must have been quite the sight. I remember a long-haired roommate passing by and giving a nod. Otherwise, whoever was in the house at the time, steered clear. Who could blame them?

Other details are lost to me now, but I was most impressed with the Chore Wheel I saw tacked to the kitchen wall. It had all the housemates’ names written around the outer edge, and a smaller circle with various chores written on it, inside, and it manually turned so that once a week, a new chore would line up by someone’s name. How ingenious! This I could appreciate.

It was the only time we ever went there.

I remember the first time I saw a copy of Playboy magazine.

After she married, my older sister, trying to be a hip woman of the world, gave our father a subscription to the men’s magazine for Christmas one year. This was odd for several reasons. Ours was a conservative, religious household. Our father was no ladies’ man and gave no evidence (beyond becoming animated about the yesteryear film star Mitzi Gaynor) of being all that interested in such things, at least not at that point in his life.  He was not even lusty toward his wife, our mother (no bear hugs, kissing, or vocal hubba-hubbas, let alone swats on the ass were ever on display). My mother would surely not have approved of either the magazine or the gift but I now expect she must’ve looked the other way, and not objected audibly since it was her favorite daughter doing the gifting. That’s my best explanation anyway.

After we expressed interest, it was decided that my sister, two years older, and I, could see an issue of the magazine. We were probably 11 and 13 at the time. However, our father went through it first and then handed over a heavily redacted magazine. There were thick black lines drawn through much of the copy. Of course, then I was most curious about what had been hidden from us, although now, I expect I’d have been disappointed with the verboten content. This because our father had odd ways of thinking in general, and related to children, especially girl children, poorly. He grew up surrounded mostly by rough-and-tumble brothers, didn’t understand us, had no interest in trying, and was old enough to be a grandfather to his youngest children, of which I was one. Lord only knows how he decided what wasn’t fit for our viewing.

I have to tell you, though, even in its weird condition, the magazine was a happy surprise, in that I’m still a bit shocked that we were allowed to see it at all. I don’t remember much of what I thought about the visible content. I’m sure I didn’t relate to the women shown or the overall sensibility, but no doubt was glad to learn what it was. Curiosity has driven me all my life and this subject was no different. My sister and I looked at the magazine together, alone, and then returned it. There was no conversation with any adult as to what we’d seen, or if we had questions. This was typical of how things were done in our household, and I’d have expected no different.