When I was a kid, there was a toy I saw advertised on TV. It was a child-size inflatable/plastic clown that you punched which, once hit, would fly backward only to right itself. The children in the ads looked like they were having a swell time walloping on the clown. This toy may still be around and it’s possible I’ve remembered it inaccurately but in my mind’s eye, it’s a smiling clown figure. We never owned one – doesn’t strike me as the kind of thing my parents, or mother at least, would have sanctioned. I suppose I could Google it now to see if I recalled toy correctly or to find a picture but I really don’t feel like it and skipping that step is not gonna hurt the rest of my point.

My point being there are sometimes periods in my life – a day or a week or a month – when I feel like I am that clown and a giant fist keeps swinging up, seemingly out of nowhere and socking it to me. I reel back, stunned, and then straighten out my bearings again, only to take another one on the kisser. Sort of like this: 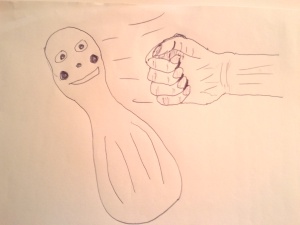 Artist’s quick-n-dirty rendering from memory. Which may or may not be exactly right.

Looking at flowers fills me with delight. 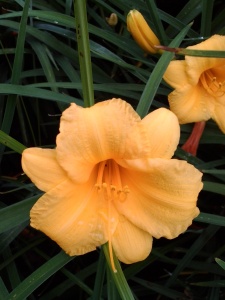 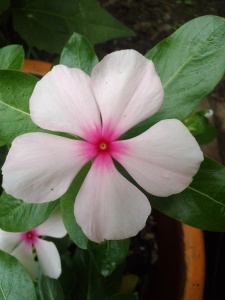 If you meet someone who has an addiction, chances are, as is true when you see a lone ant in your house or a single door-to-door religion peddler on the street, it isn’t the only one.

It’s six years since Michael Jackson died. He’s somebody I’ve been aware of all my life. I wasn’t obsessed, but I was very much a fan of his music and the then-young man himself, mainly back around the Thriller days. He seemed so likeable then. He looked like he was having fun – such charisma – and he made us want to have fun too. I was as thrilled as anybody to watch the Motown 25 special where he blew across our consciousness into a different stratosphere of entertainer. Before that he’d been great. But then he was brilliant. He’d become something else.

Before things really got strange – in the “elephant man bones” and “oxygen chamber” days and prior to child molestation charges – I distinctly remember reading in a book where the author suggested Michael might “slowly be going mad before our eyes.” That statement was so haunting. I’ve thought of it regularly in the decades since. It was awfully prescient. I don’t know if he went mad but he went something.

There’s a thought that has been percolating in my mind over the six years since Michael Jackson’s death. The way I understood it, he died primarily from a drug he took to help him sleep, one that was not traditionally used for that purpose, but was used to put people under for surgery. It was reported that he insisted on being prescribed the drug.

Exactly how badly must someone want sleep before opting to be administered a drug meant to render pre-op patients unconscious? One never intended as a sleep aid? How crazed and desperate would you have to be even to try it in the first place? This is all the more puzzling considering how incredibly common sleep problems are, resulting in an industry rife with sleep medications and aids. There’s quite a few steps between counting sheep and being rendered unconscious.

I don’t pretend to know what the life of a superstar celebrity is like, with its overbooked schedules and incessant pressures. But from a human angle, I very much know the importance of sleep. Personally, I find that sleep rules my personality and outlook. When I lack it, I’m prone to pessimism and joylessness. I feel like I can’t cope with things. Everything seems like an ordeal and effort. It is almost shocking the difference a decent night’s slumber has on my well-being. I’m perky and energetic and smiling at the world. My mind is clicking with ideas and I bound around getting things done. While surely some of us are more sensitively wired than others, I can’t be alone in this dualism.

So sometimes, when I can’t get to sleep, or more typically, wake up in the middle of the night only to toss around and stew, or when I drag around all day fatigued from a piss-poor right’s rest, I think of Michael Jackson and how desperately he must have wanted sleep. Enough to risk having it forever. 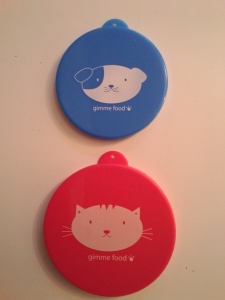 These plastic lids amuse me. As you might surmise, they are for re-sealing opened dog and cat food cans. I found them in the pet food aisle at the grocery store. I don’t have a dog or a cat and as I am not yet reduced to consuming pet food, I don’t use the lids for their intended purpose. The cat lid is a perfect fit for a standard tuna can and the dog lid is a match for a 15 ounce can of pumpkin (which I use often in baking). But what really sold me was the words gimme food which so perfectly sums up my personal philosophy.