I coaxed along a few sunflower seedlings that came from winter/spring birdseed. They were worth the trouble. This one is 2″ across but so detailed! 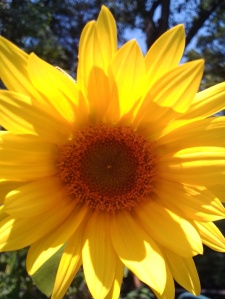 A man who had mattered tremendously and who’d significantly influenced me, turned up via an out-of-the-blue email after 20 years of silence. I always thought I’d hear from him again, but after a year, 5 years, 10 years, 15 years, 20 years rolled by, I no longer believed it. I was young when I’d known him and though our relationship ended in a convoluted way with no specific we-are-breaking-up-and-this-is-over discussion, I suppose I believed that what was between us was so important and strong (to me anyway), that we’d again have contact of some sort. A very wry part of my brain says, yes, well, we did! A somewhat breezy, short message 20 years later wasn’t exactly what I’d imagined…

The length of time wasn’t because I was so very hard to find, as I’d stayed in the same part of the country, whereas I knew he’d (courtesy of the internet eventually), moved around where his career took him. His career had been the most important thing to him during our relationship, and there was plenty of evidence that it had remained so. Lord, was he ever driven and he had the accolades to show for it. You might wonder why I didn’t go ahead and contact him since he was easy enough to find. Couple reasons. I had last contacted him after we’d each moved to new separate cities, mine nearby “our” old one, and his across the country. I wrote to him and he simply never answered. It was like he disappeared into a black hole. The relationship had problems, including not long before we parted a specific negative incident he caused and then wouldn’t discuss. He had talked loosely about me making the move with him but I had plans of my own and frankly, we just weren’t at that point where I’d move across the country to be with him. Would we have ever been? I don’t know but the signs weren’t exactly headed that way. Especially after he moved and I never heard another peep out of him. Not a call, not a postcard, not a carrier pigeon.

The last time I saw him was weird. I stopped by his apartment on my way to my new city, and he acted unusually cold and distant. A self-defense mechanism? Who knows. At the time, I was confused and hurt. He’d talked previously about having me visit him in his new far-off city over the holidays later that year. Now, there was no talk of when we’d see each other again. Maybe he was irritated I’d gone ahead with my plans or because I’d vetoed the idea of helping drive his u-haul across the country after which he’d put me on a flight home (which I did reject – and said – because I didn’t believe he’d look out for me, meaning my well-being, on the hundreds-of-miles road trip.) Then as now, it’s just a guessing game why he acted oddly that last time or why he dropped off the map after he moved.

So here it was all these years later, long after I’d given up any thought of hearing from him again. In his email, he writes something pithy about the roundabout way he found my email address, hopes the “years have been good” to me (oh yeah he does), and remarks that he is much the same, only “older, fatter and dumber.” That man may have been older and he may have been fatter (he’d been lean and compact when I knew him), but there was no way “dumb” would ever apply. He says his career has gone well. My take? It was the kind of “feeler” note/email a man sends when he wants to throw a hook out there to reconnect at some level but not risk too much in the doing. No mention whatsoever of the relationship we’d had or the unclear way it ended; no fond memory of me or regret, nothing revealing.

Now I’ve always been the kind of person who couldn’t resist responding to other people, who could be drawn in by a voice from the past, who’d want to push to get something more out of them, and in a case like this, to get a more genuine connection. And I had a pretty good sense that if I answered him, in any way, that would quite likely prompt more revelation from him. But. I was feeling differently now. Other than being unimpressed – after 20 years and a strange break-up – with the tone and content of the note, there was something else that gave me real pause. See, again thanks to the internet, I knew he’d had a child, one who was still fairly young (i.e., hard for his father to overlook). And yet, he says not one word about this. If only he had. That omission greatly troubled me. If you don’t want to say anything about other women, be they wives, girlfriends, or your child’s mother, I can understand that. But the child? No. He should have mentioned his child. Anything! “I have a kid,” would have done the trick.

I no longer needed anything from this man (apologies, well wishes, clooosure) and dramatic as it sounds, I thought: we can go to our graves without any more contact. I never felt anything so definite or final about anybody I’d been involved with before that point; the future had always seemed a broad, nebulous thing and I was open-minded. Here I turned a corner. I will never ever downplay what he meant to me or the ways he challenged and influenced me. I still think of things he said, times we had, and who I am as a consequence of having known this particular man. I don’t need the current him for that. I’ll keep tabs on him from time to time via the internet, but that’s enough.

HIM (a man I’d recently started seeing): “I hope I don’t screw this up.”

Earlier this month Amazon asked the FAA for permission to test its latest innovation, package delivery by drone. Like a lot of other people I’m awfully intrigued by this whole drone business. I wonder, if it goes forward, how Amazon plans to protect the drones? Nothing has been mentioned about arming them (which could make things interesting). I’m sure gonna be pissed if somebody shoots my drone delivery out of the sky and sets about enjoying my 4-pack of Bob’s Red Mill Sunflower seeds. If I catch ’em, it could get ugly: “You there! Drop the seeds, step away from the drone, and nobody gets hurt!”