This post has been percolating since I wrote The End of My 2018 New Year’s Resolutions in November. I have more I want to say. I’ve been reflecting on this past year, framed against the goals I set for myself. The goals were simple but effective. I made improvements to my life and that’s something I want to continue.

I’ve said this before in a couple ways but I believe that when someone is dealing with a problem, be it relationship troubles, or job issues, or money worries, or health concerns, or grief over a loss, or any kind of time-and-energy-sucking problem, the last thing they typically feel like doing is making life improvements, that is, adding new responsibilities or commitments. I’ve had a problem that weighs on me for the last several years. It’s one not of my making but which has been visited upon me. It ate up a lot of my energy and frankly, depressed me.

Further adding to my state of mind was the suicide in 2016 of a man I knew. It brought up a number of feelings both those related to this man and his suicide, but also those of suicide, death, loss, and grief more generally. The reality is that the longer you live the more people you know who will die. Dwelling on such thoughts, while purposeful for a time maybe, can reach a not-useful point.

In summer 2017 I made a turn-around. The overarching problem in my life didn’t go away but I resolved to switch up my attitude and to resist pouring my good energy into a crappy situation. I did what I could do to make things better for myself, knowing that nobody else was going to step up and do that (that was very clear). I had to shut off some of my feelings and stop being so vulnerable. Vulnerability is a key point in my psyche – it’s how I’m wired – but in this case, I needed less of it. And by and large, it has worked. I toughened up to my own benefit.

Having a little more steam led me to making simple resolutions at the start of this year, ones that excited me. No, I wasn’t going to train for a marathon, or travel to Europe or get a Masters but it didn’t matter. I was the one I was measuring myself against (yes, yes, I know that’s what we’re SUPPOSED to do but c’mon, who never measures their self against others?!) Breathing new life into my life was my intent.

As I looked back over my calendar I saw that in addition to my simple goals, I’d also done a few other things. I did both a dairy-free week and an Amazon-free week (no looking even). And to my own surprise, starting back in August, I more or less gave up coffee. I hadn’t planned to (I was sick for a few days and didn’t drink any) but I decided to give it a go. Sometimes I have tea or homemade cocoa in the morning but most often, I make a version of my healthy drink. I won’t kid you, taking the time to make this drink is a nuisance – knocking back coffee in the morning is easier & quicker – BUT with the healthy drink there is the benefit of sustained energy, not to mention not eating away at my bones – which I’d really rather keep – with caffeine. I miss coffee and that mini instant high and I can’t say I’ll never start again but for now this is working.

I committed in 2018 to stop watching three specific TV shows that I used to watch, while not all the time, frequently. They weren’t good for me. I am happy to say I did it. While eliminating junk from entering my mind, I also made a point of adding good influences, largely through books and by following several public figures on Facebook who have something to tell or teach me. I didn’t stick with all of the individuals I started with but I’ve kept a core few. I want more of that and I’m going to continue to be selective about what I let enter my mind.

The local Dollar Tree sells small crossword puzzle books. The books feature many puzzle-makers so it keeps you on your toes (it can be easy to learn one person’s tricks and tendencies and not be so challenged after awhile). In the last year or so I’ve done 50 puzzles in this book. They’ve made me sharper. I know more than I think I do and the puzzles force me to remember.

As I recently wrote, I started playing Scrabble and that too, has given my mind a boost, plus I LOVE playing it.

I hesitate to mention this, because I’ve done so little and it’s very new, but I checked a CD series on conversational Italian out of the library. My language skills are limited to two sad years of high school Spanish. I disliked language classes so much that I managed to create a college degree for myself that eliminated taking any language courses. This isn’t because I’m The Ugly American who can’t be bothered but because I felt I didn’t have a knack for languages and the way I was taught in high school left a bad taste. I’m half Italian (father’s side) and I thought well, hell, maybe there’s a tad of residual DNA that might allow me to pick up Italian? Yeah, um, two hours into the CD lessons and I am thinking NOT. I suspect my pronunciation is quite bad and my dead ancestors are spinning. Ah well. As of now I know how to say I don’t speak Italian. Poorly.

I am going to do goals for 2019, but except for reading 20 books, not the exact same ones as 2018. I want to at least get through the conversational Italian set of CDs. I want to try the NYT crossword puzzle if I can get ahold of it (looks like you have to subscribe online?). Not all the goals have to be lofty; I want to watch the Marx Brothers movies again. It’s been awhile and I could use it. I made up a list already to get rid of fifteen things; I’ve already shed so much I think it could be a challenge; on the other hand I found four or five things to get rid of just this morning, so maybe not! 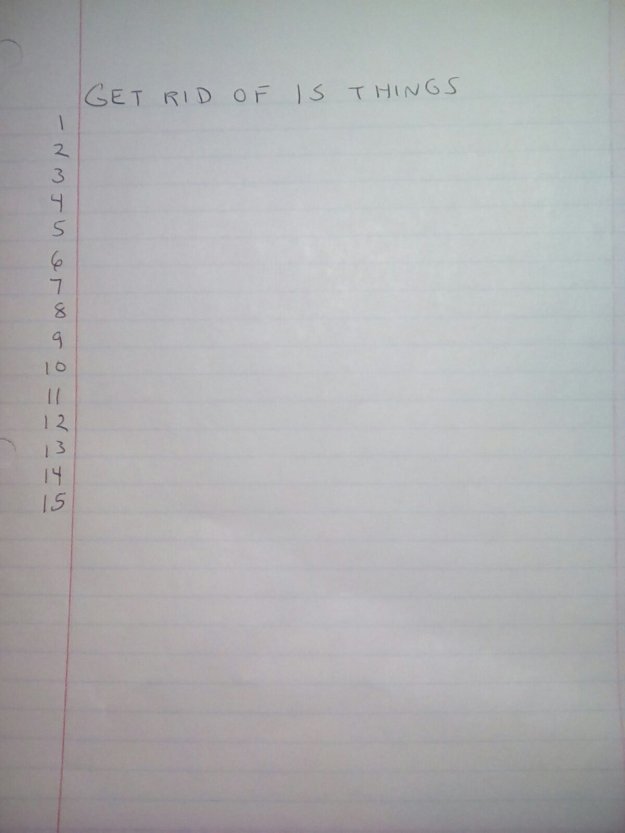 Physically, I’m in pretty good shape, literally and metaphorically. I don’t need to set a lot of exercise and fitness goals because I already have many in place. However, I’ve been thinking more seriously about yoga. I’ve sort of done yoga here and there on my own but don’t have anything that could be called a “yoga practice.” And — should I ever use the phrase “yoga practice” in a serious way, you are welcome to take me out behind the barn and give me a very stern look.

My flexibility and strength aren’t bad, particularly for my age, but they could be better. There are things I stopped doing for one reason or another, including injuries, but I want to see where I’m at and try to push further. I hadn’t done a headstand of any stripe in probably 10 or 12 years, maybe more. Recently, I decided to try one against a wall. At first, I thought there was no way I was getting my ass up off the floor but I did! It felt very strange, it had been so long. I doubt I’ll get to a place where I can do one without the support of the wall, but even this, is a good step, one I’ve repeated since.

I see that what happens with older people is that their range of motion slowly, subtly goes away for lack of maintaining it. And then they become afraid of hurting themselves, which is not without cause. An injury when you’re middle-aged and up can take weeks, months, to heal, if it heals at all. I need to stay on top of things. And push myself some. I haven’t decided exactly what I’ll do – being specific helps a lot with goals – so I need to nail that down by January. I have found a yoga blogger here on WordPress who I relate to whose videos inspire me to want to do yoga. I also like the idea of getting in the habit of doing the sun salutation, a simple, straightforward series of moves, at least somewhat regularly. And I know it’s heresy but I don’t care much about any of the breathing business or learning all the fancy pose names with whatever yoga I do – it’d be counterproductive to overwhelm myself now.

So these are a few – maybe more than a few – of the thoughts I have going into a new year. I’ll likely do a post once I’ve got my specific plans in order.