I’ve had a productive winter, starting in December. I was feeling vaguely dissatisfied with my kitchen, which I last showed here a  year ago. I thought I could do better.  After all, I am in the kitchen a lot and I want it to be cute, usable, and inspiring. I was looking at stuff on Amazon when I saw these Tuscan stick-on tiles. I was immediately smitten (at the time I was able to get two packs of four for $20; they are higher at the moment).  The tiles gave me an idea. Why not an Italian kitchen? Or a semi-Italian kitchen? After all, that’s what I am! Semi-Italian.

My kitchen was busy, there was no getting around it so I decided best to just give in to the busy look. (I see those sleek, modern empty kitchens in magazines and on TV and while they can look great, that’s just isn’t happening here.) I was thinking also of something somewhat retro in theme. I’m a renter so a major overall is out of the question but I still have a lot of leeway.

I took down and dismantled the mug rack I built over the stove and extended the utensil rack I made in its place. I took down the spice rack I built and made a new, more compact one. I painstakingly removed the (free) blue glass tiles I’d put up as a back splash over the sink. That was a bitch. Apparently I put ’em on real good!  For the cabinets I found  wonderful ivy stickers on Amazon as well as the yellow glass knobs. I toyed with getting bright colored ceramic ones, like a bright yellow but decided to go with something a little more subtle.

The vinyl tiles have a clear plastic cover that adds dimension and makes it look more like real tiles. I didn’t extend it over the oven because the manufacturer said not to on the product page and besides, that would have cost more. I ditched the silly two-outlet tap and replaced it with this  six-outlet tap. (By the by, whoever installed the outlets did so upside down which I finally realized but after taking a look inside I decided that level of electrical work was beyond my pay grade.) I used double-sided tape squares to put the tiles up (instead of permanently installing them by removing the backing).

Because I eliminated the mug rack I needed to make more room in the cabinets. I previously made shallow shelves for the back of the lower cabinets so I opted to make more so that there are narrow shelves all along the backs. Very convenient!

I found great little Moondance (by Circleware) salt & pepper shakers at Ross for the back of the stove. I found the sugar dispenser at Dollar Tree years ago. That’s a “vintage” tea kettle I’ve had a long time now (it came from a house that was being cleaned out). I previously put decorative stick-on paper on the back of the stove (where the word “Sunray” is) and took many days peeling it off in tiny, tiny, tiny, bits. The color part came up but left the sticky back in place which I proceeded to remove by fingernail (I didn’t want to scratch the stove surface with a tool and nothing I tried would dissolve the sticky stuff). It was the worst part of the project.

The shelf unit to the left of the stove is one I made from scrap wood a few years ago. I fixed it up a bit now by adding colorful place mats I found at Dollar Tree to the bottom door and the top. It was only after I bought them that I saw “Moroccan” on the receipt. Oh well, I’m not splitting (Italian/Moroccan) hairs here! That small $2 fix really spruced up the shelves. I found the retro kitchen timer at a rummage sale last year. It works great.

The cabinets extend on the left side of stove so you can see below where the ivy starts.  I took the blue-checked fabric off the window where it’d served as a curtain and instead hung it in front of an ugly water heater and various cleaning tools (vacuum, brooms, etc). It might be fun to have a red-checked one eventually… but I already had this blue one from a thrift store.

My canned tomato stash is on shelves below the far left cabinet. I also moved my glass jar collection there (from above the kitchen cabinets). I am proud to say I have wittled it down to what you see here in the bag, so far as jars I’m not currently using. (I tend to hang onto glass jars for fear they will one day be unavailable.)

Initially I tried fire-retardant decorative foil-look film over the stove, thinking it would be reflective and add light to the space. It didn’t. I didn’t like it. It absorbed too much light and looked cheap. Instead I put a small piece on the bottom of this 1800’s (or thereabouts 😁)
stove.

Recessed lighting of some sort would be nice but plug-in under the cabinet lights suffice. I had one light and added another; they link together. The photo on the left is how it looks straight on and the one on the right lets you see the actual light fixtures.

I found cute retro-style coffee curtains on Amazon. Looking at Amazon gave me general ideas because I wasn’t too sure initially what inexpensive things I could fairly easily do for an Italian theme. Much of what I saw was to cutesy (fat chefs were featured on a lot of decor) but I wanted more authentic, subtle touches.

I eliminated most of the fire-engine red color I’d previously added to the kitchen- I decided it was too much – but have left this lone cabinet over the washing machine that I painted long ago. I toyed with painting it white but as it’s different from the other cabinets, I think it kind of works as red and adds character. I also wanted to show you my “plastic bag hanger” for freshly washed bags that I hung over the washing machine; it’s actually a small laundry hanger in design. And those are just-fit shelves I made a few years back for laundry detergents. It may not look it but you can still open the  right cabinet door.

I took off a dark wood handle I’d put on the kitchen’s token drawer and put this simple white one on instead. Some time back, in search of more space, I’d opened up the area under the sink and made a slipshod “drawer.” It never worked very well so I ditched it and put in this wire basket instead. See where I added more of the ivy stickers just under the sink too. (To the right of the stickers, with the small white-handled door, I made a simple shelf for microwave pans, in what was previously unused space.) 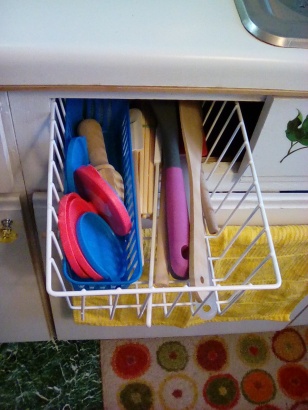 Turning our attention to the other side of the galley kitchen, I painted this previously bright red, tall cabinet door white and added a few ivy stickers. The inside of the door looked awful where I’d tried to peel off stick-on paper rather unsuccessfully, so I added new wood-look paper and a place to hang bag clips. 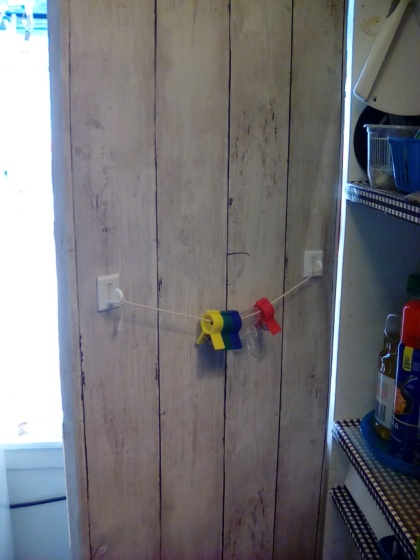 In my quest to eliminate the fire-engine red (a change I started before I came up with before the Italian theme) I painted the posts and the defunct pipe this red-orange. I eliminated an ugly shelf I’d put over the doorway – the board was warped & the stuff on it wasn’t attractive – and re-housed the stuff I had up there in other places. I got an inexpensive olive-themed clock from Amazon to hang over the doorway but sent it back because it was mediocre quality. I am still looking for the right thing to put there like maybe a tin sign featuring food. 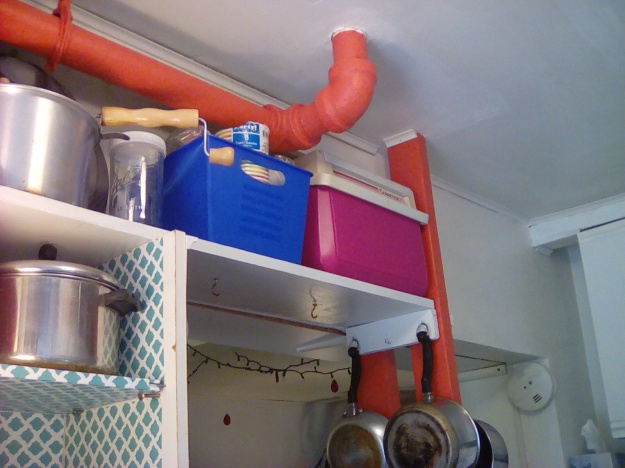 I put fresh paper from Dollar Tree on these open shelves. I didn’t do anything new to these jar shelves by the window that I made (I don’t think) but just wanted to show them to you again.

Here’s a view from outside the kitchen.You can see the new color on the posts, which closely matches the chair. I got a new chair pad for the chair too. The “stone wall” stick-on paper was an earlier project but it complements the Italian theme so that worked out well.

In keeping with my semi-Italian theme, I added these placemats I found on Amazon to the small table.

I don’t think I’m quite done with my kitchen project but I’m really happy with what I’ve done so far. It’s a cheery place to go into now!

In October I found wood shelves tossed out on the curb. I wasn’t sure what I’d do with them but finding real wood furniture always makes me happy (pressboard or particle board crap just isn’t the same). About 29″ tall and  33″ wide, they weren’t too heavy so I carried them home; I knew I could pass them on to someone else if I couldn’t find a use for them. Otherwise they were almost certainly going to the dump – trash day for that area was the next day – and any other passerby wouldn’t likely see their potential since they didn’t look like much at first glance.

The paint job, likely a stain, was uninspired.

Before I even brought the shelves home, the words on the back caught my attention and sealed the deal. 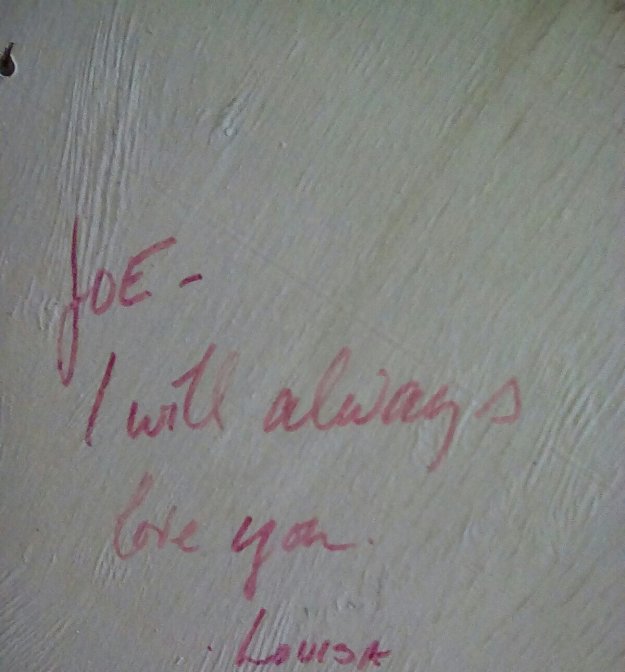 Now that was curious!  Who are Louisa and Joe and why were their – or his – shelves chucked out for trash? Does she no longer love him? For whatever reason, were they no longer together (if they once were)?

It happens that I know someone by the feminine name but she spells it differently and moreover the woman on the shelves wrote her last name too, which I’ve edited out of the photo for privacy. It was an unusual name and googling it got no hits, further compounding the puzzle. I wonder if it wasn’t either of these two people who threw the shelves out but someone else. Maybe Joe nor Louisa was still the owner? Those words are an unusual thing to write on nondescript shelves anyway. Shelves aren’t all that romantic.😕 Maybe she painted them for him? Or secretly wrote the words on the back for him to find? And when was this written anyway? It just raises a lot of questions, the sort that intrigue me.

Now that the shelves were mine, the first order of business was fresh paint. I decided I could use the shelves in my room, if only temporarily, so I used this green that’s close to a shade I have on half the walls. The shelves aren’t ideal here because they extend past the window but I found myself in need of a little extra clothes storage, at least between seasons, so these will do. Painted, they look like a completely different piece.

After I fixed up the shelves I found these interesting fabric bins at Dollar Tree. This setup may be temporary but for now it’s fine. And I will never paint over or otherwise change the words written on the back. In the end, I find the “secret” declaration of love, whether it lasted or not, kind of touching.