Personally, I am too vindictively American, too full of hate for the hateful aspects of this country, and too possessed by the things I love here to be too long away. –Ralph Ellison

No, flamboyant artificiality is one of the things I love most about this country. –Jim Knipfel

What could possibly go wrong on a holiday that’s celebrated with beer and explosives? –Homer Simpson

Is there a more American holiday than the Fourth of July? Sure, we’ve got Thanksgiving but the Fourth screams USA loudest I’d wager. I don’t consider myself wildly patriotic; I feel connected to humans and don’t automatically align myself with Americans. (For instance, if the news reports 200 people were killed in a plane crash and 13 of them were US citizens, I don’t immediately think the loss of Americans is inherently worse; the other people mattered too.)

Also, Americans give patriotism a bad name, something I thought long before the current Administration. There often seems to be an ugly tinge to American patriotism that doesn’t sit right with me. However as I’ve grown older I’ve started to reconsider this patriotism business. As in why can’t I be patriotic on my own terms? Why can’t I have my own genteel brand of patriotism that doesn’t involve bashing other countries, or redneck bravado, or bullying immigrants with “You’re not REAL Americans” propoganda? I think I can! Why, I’ve even toyed with purchasing some kind of patriotic apparel like a flag-themed bandanna or a red, white & blue tank top! It hasn’t happened yet but I’m thinking feisty thoughts.😁

These are some of the ideas that led me to want a little bit of 4th of July decor this year. A year, clearly, that has been tough here. Americans are struggling & hurting. This IS my country flaws and all. I agree with the writers of the quotes I included at the top of this post. I ain’t going anywhere. So it’s time to wave that dang flag!

Not too far back I made a 16″ square out of scrap wood that I put on top of a smaller table to use as an end table in the living room. It looked okay but when I recently found this excellent table I dismantled the makeshift one and put aside the “top” thinking I could take it apart for pieces or maybe find another use for it. When I began thinking about patriotic decor I looked at the wood square & got an idea. I had red spray paint and the wood square was already painted white but I didn’t have blue paint. However I had blue painter’s tape! Sure it’s not quite the right shade but so what?

I made a “star” stencil out of heavy paper to use with spray paint. 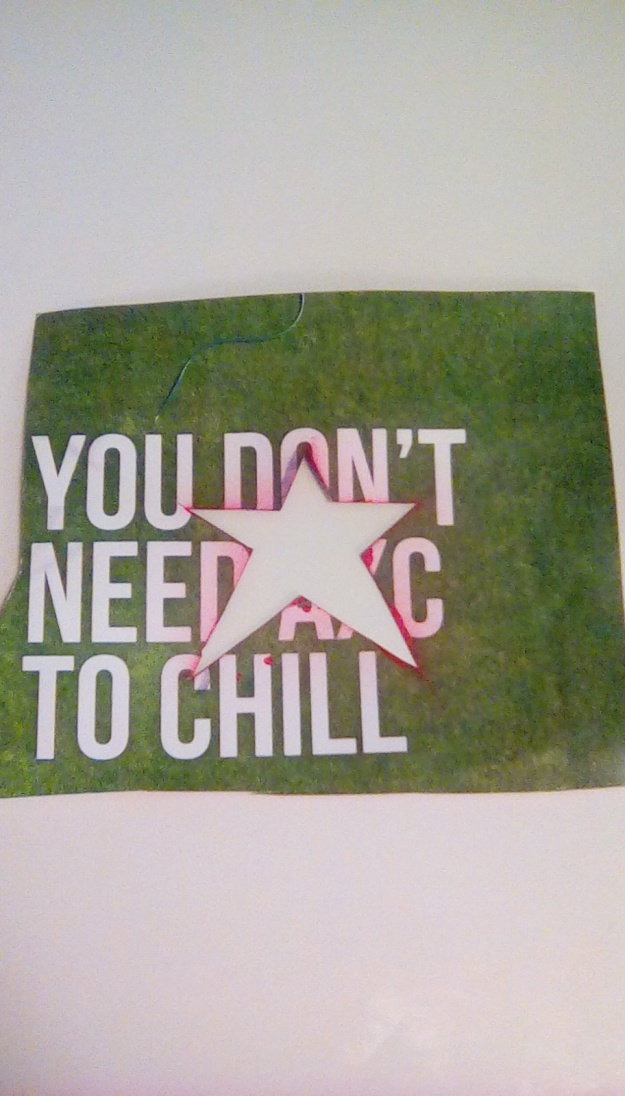 I put a small hook on the back of the wood

First I applied strips of blue painter’s tape, then I spray painted stars. The star stencil didn’t make precise stars – the edges “bled” some – so the most time-consuming job was using a tiny brush to touch up white all around each star. I think the finished project is on par with decorations you’d find at a Ross or other mid-range store. 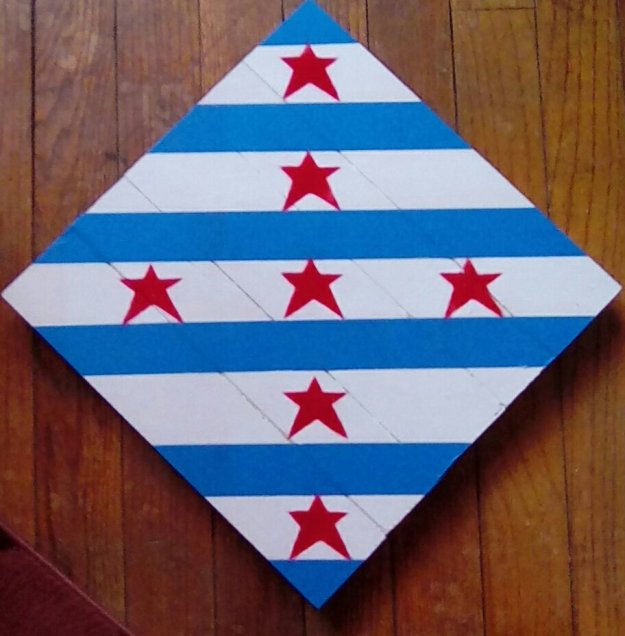