Okay, so I did all right. I won’t be crossing quite everything off the lists but I’m basically satisfied. In both 2018 and 2019 I made highly specific “kinda, sorta resolutions” tailored to me. It’s worked out well.

I read 33 books. The goal was 20. I did most of my reading in the early part of the year. I put check marks by 13 of them, indicating which ones I really appreciated.  I can’t read the way I used to; it takes more to hold my attention, more to get me to sit in a spot for hours with a book. Because of that, six of my 33 were books I’d read in years past and wanted to read again. Sometimes I just need a sure thing. I have little patience these days for trying to get into a book, trying to relate to characters, or trying to care about the subject matter. I get restless. And I KNOW there are books – like all things – which can hold me; it’s a matter of finding them.

A year ago I bought a yoga mat and a DVD player for the TV in the living room, the only place (other than outside!) where I have space for doing yoga. As with the reading, most of my yoga was done earlier in the year. I am very active outdoors most of the year and didn’t need more exercise of any stripe. Because I hadn’t totally factored that in I fell somewhat short of my intentions. I’ve done the five-minute “sun salutation” 38 of 50 planned times and the 30-minutes of yoga just half of 25 planned times. That said, when I DID do yoga it was usually in 40-45 minute increments per the instructional DVDs.

I like yoga. I don’t worry much about fussy breathing or learning all the poses’ names, or anything that might daunt, bore, or intimidate me. To me, yoga is exercise. Exercise focused on strength, balance, and stretch. It’ll make your body move in ways it wouldn’t in the normal course of a day which is an especially good idea for anyone who is aging. Otherwise you end up like the tin man!😯 I want to be strong, agile, and spry as long as possible. The way I live is dependent on it at many levels. I will not go down easily. I know I’ll be doing yoga over the winter.

I did ZIPPO with learning Italian from cds. That fell off the map in short order because I wasn’t enjoying it and I wasn’t learning Italian. All I can say is I recently heard “piazza” somewhere or other and knew it meant plaza.😐 I think I ‘d like to learn – or try to learn – key phrases and words at least as a starting-off point rather than attempt the language itself. That, or I need different cds. I felt inept very quickly with the set I was using. Other than English, I have never felt I had an aptitude for languages and my opinion after this year hasn’t changed a whit.

Thai cooking wasn’t a success either. Thai cooking, it seems, requires a lot of ingredients I don’t typically have and more trouble than I wanted to invest. I did attempt spring rolls because I love them when I have them out but mine, which I decided to bake since I cook NOTHING in pots of oil, were okay, not great.  Instead, I continued to make this Thai-inspired cole slaw. If I can find more recipes like it, I’d definitely try them. Lime, peanuts, cilantro, be still my heart!

I watched a lot of DVDs, both movies and series. I had wanted an idea of the number since I’d never kept track. The thing I realized is that as with books, I need the right movies or series to hold me. I ADORE movies, as I adore books and music. But a lot of each is just average, nothing special, not to me. I want the gems, the ones I get excited about, the ones that thrill me, and make me sit back in awe of someone else’s brilliance and accomplishment. How did they do that?! That’s the feeling I want. That’s why I read, watch movies/series, and listen to music.  I want to have that O-MI-GOD feeling. Am I demanding? Do I expect too much? Yeah, well maybe. But once you’ve had that feeling, it’s the grail you reach for again and again.

I wanted more levity in my life and entertainment. I’m not so sure I succeeded in that goal – I did find myself drawn to dark and/or moody offerings –  but I did (re) watch four Marx Brothers films as planned.

All that said, in 2020 I will put a cap on the number of DVDs I permit myself. I haven’t decided yet on what the number should be – or if it should be based on hours – but it will be less than 2019. Not to be puritan or self-punishing but to free up some of that time for other things, even if the other thing is as mundane as sleep – I often turn to DVDs when I’m too tired/spent for anything else, such as too tired to read a book. And, I have to come back to this; because I kept track, I could see that a lot of what I watch isn’t all that. About half of what I watched got a checkmark beside their titles on my list; the rest was mostly average.

I kept playing Scrabble. I got a board for a good price from Amazon on Prime Day and happily threw out my homemade one.😊 I didn’t keep playing with the group I’d joined in 2018. They fought too much and it irritated me. It may have been the age cohort; I’m not certain just questioning. Groups and me rarely mesh so it’s not like a big surprise. I’m still doing crosswords and other word puzzles. I did get ahold of the NYT crossword and liked it a lot but even more so, the “Spelling Bee” puzzle where you make words out of the letters from the proffered word and reach score levels dependent on how many you find. I wanted “genius” level, always, damnit! 😊 As I’ve written, if only there was a job for this skill… I love all things words and I want to stay sharp and not get lazy.

I am on track for cutting my grocery spending by $400 less than 2018.  I’d spent $2200 in 2018 and looked at as a lump sum, it seemed high. I had been a bit indulgent last year. I’d tried fancy oils including avocado and walnut and had bought discounted shrimp a number of times. Yes, that was fun but it wasn’t necessary. I kept my 2019 receipts. 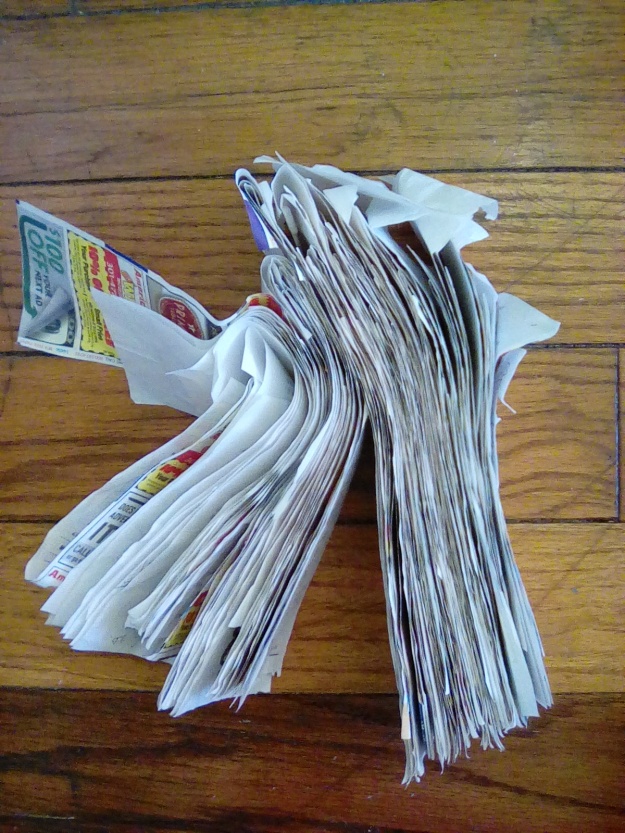 That’s not even all of it. For several years I’ve been buying “dry” or “pantry” foods from Amazon but starting this summer I also bought cold foods and produce, none of which I have paper receipts for but I did keep (comprehensible to me) track of my spending.

See, this summer I actually turned a profit by buying Amazon foods. There were various discounts and I made over $50 for such promotions as “$10 off your first Amazon Fresh order” and so on. My rule was to only buy things I wanted/needed at prices I’d typically think were good. That way, any discounts were basically income.

I never thought of myself as the kind of person who had groceries delivered. (How fancy! How indulgent! How not for the likes of me!) But Amazon has made it easy and if something isn’t right, they refund it, no trouble, no hassle. Which is utterly unlike my experience with local grocery stores I patronize (trouble, hassle, no apologies). It’s more of a gamble to buy food you haven’t seen, true, especially produce, but Amazon, so far anyway – things can always change – has made the gamble worth it. Given the amount of food I plow through (and not owning a car), being able to have some delivered is a delight. I know this will sound odd if you aren’t wired up like I am, but I had to believe it was okay and I deserved it. That it wasn’t lazy and indulgent and possibly elitist. At heart that’s why I’m writing about food purchases; it dovetails with an ongoing theme in my life.

I didn’t plan this specifically but I was pescatarian this year. I bought no meat, no chicken. I didn’t put it on the blog but in fall 2018 I had a disgusting dream about chicken 😳 that put me off it. I don’t mean it was a message from chickens in the Great Beyond or something – I don’t think so – just that it was off-putting. Those Popeyes ads still look good but I haven’t had Popeyes in years either. I’m not a fully committed vegetarian (and forget about veganism), but I am generally vegetarian/pecatarian.

I planned to get rid of 15 things, thinking, naively, that with the amount of decluttering I’ve already done in years past, that it would be challenging. Silly me! I got rid of 171 things in the last year. Mostly it was small stuff. Every time I go through my belongings I find more to jettison. I haven’t stopped buying new things or going to yard and rummage sales let alone hauling home interesting finds but my standards are raised. I have a strong sense and vision of how I want to live. I think it matters very much.

I wanted this year to be about challenging myself physically and mentally, and on whole it was a success. My “resolutions” targeted my intentions. Behind the entire enterprise is a desire to mind my focus, “mind” as in minding your time or minding your p’s and q’s. I have been on a mission for several years to stop getting over-involved in other people’s problems and concerns, to invest more energy in myself and my own interests, and to “mind my own business” in the most literal ways. There are so many distractions to be had and so few are worthy. Many phrases are tossed about these days in the culture at large and many of them rub me wrong but I like the one about “staying in your own lane.”

As most of you would likely agree, the internet plays a large part. So many things to get caught up in! So many distractions! So many outrages! I spend time online but I don’t want to live there. It’s too easy to get sucked into all sorts of things if only psychologically.

My little resolutions force my own hand.  What matters to me? What will make me feel like I’ve accomplished something? What do I need to improve? What is going to bring me closer to the kind of person I want to be? How do I want to spend my “free” time? What will bring quality, depth and purpose to my life? These are big questions and sometimes you/I just want to sit in a corner and watch Game of Thrones. While eating popcorn. Which is fine just not as a lifestyle. The big questions matter. To me. Now I have a bit more energy to pay attention. There were years I just didn’t, or not all that much. And I think that’s fine when you just don’t have it in you. But I  am back to the business of steering.