It’s over 6 months – yikes over half way – into 2019. Time for an update on my kinda, sorta resolutions. This is my second year nailing down specific, simple things I’d like to accomplish. I consider it a positive new thing. It gives focus and a certain order to my year.

I have read 25 books. The goal, which I expected to exceed, was 20. The most recent was the 400+ page Maybe You Should Talk To Someone by Lori Gottlieb. It’s part memoir, part nonfiction, a fascinating book for anyone psychologically minded. It gave me a lot to think about. It’s the longest book I’ve read since I got serious about reading again (less internet, more books).

I have slacked entirely so far as continuing the Italian language cds I started in late 2018. I think it’s because I didn’t feel successful. I never felt I had a knack for languages and I can’t say my opinion has improved! I will try again but maybe a different cd set. I can’t give up this easily; I mean, geez, I should nail down a few phrases at least.

I have kept up my crossword puzzles hobby and, as planned, got a hold of several New York Times Sunday papers so I could try theirs. I really like the NYT puzzle. The puzzles increase in difficulty over the course of a week (one of my commenters pointed this out to me but I didn’t know which day the NYT “week” officially started). The puzzle is easiest on Monday and most difficult Saturday,  with Sunday’s puzzle being equivalent to a Thursday in difficulty. Having that measuring stick is useful.

I didn’t do as well on all the puzzles I tried as the one pictured but I’m still pecking away at them (without using the internet for solutions). The puzzles are created by different people and a short bio is included. A 25 year old named Erik Agard, a professional puzzle maker, had, as of June 2, contributed nine puzzles to the Times this year, more than anyone else. Professional puzzle maker! At 25!! I look at the puzzles and (very) vaguely wonder if I could make them. I don’t see how you’d even begin. Daunting. Which makes the 25 year old maker that much more impressive.

My favorite thing from the NYT however, is “Spelling Bee” , a challenge of making words from proffered letters. I don’t know exactly what it is about this but I love coming up with words. I need a framework though, and as with “Spelling Bee” a way to rate my progress. The Times has: Good, Excellent, and Genius scores. Naturally I’m striving for Genius! And occasionally with actual success! (So why aren’t there JOBS that need such a skill?😕) Useful or not, I always enjoyed finding words from random letters but now I see the importance of such word games in keeping your mind sharp, more so as you age.  Mental (and physical) challenges were part of 2019’s resolutions.

My self-instructed yoga got off to a good start. I’ve done the “sun salutation” – a five minute pose set – 21 of a planned 50 times. Additionally I’ve done 30 minutes plus of yoga 12 of 25 planned times. I haven’t been doing yoga recently because I’m very active outdoors in Spring and Summer and I really don’t need extra exercise. I’ll plan to pick it back up later in the year. Since I’ve done just about half, I think I should hit my goals by December’s end. I’m intent enough that I bought a DVD player for the TV in the living room – the only spot in the home big enough – where I “practice” yoga, primarily using library DVDs. I tried different ones to see who I’d like. I’ve never used exercise DVDs so this is new. It kind of makes you feel like you have company although I wonder if repeatedly watching the same one or few would get old? (I won’t pony up for classes and don’t feel the need.) I think if you get bored of hearing the same things, you can turn the volume down and just follow the poses.

I regularly de-clutter and get rid of stuff – and have been at it for years – so at the end of December I made a modest goal to get rid of 15 things. What was I thinking?! I’ve already let go of 125 things. I surprised myself. Getting rid of stuff is addictive, though. And really, I’m down to almost all little things. It feels awfully good to shake off debris that no longer serves you. Keeping a list makes it more fun. Same with the other numerical goals. 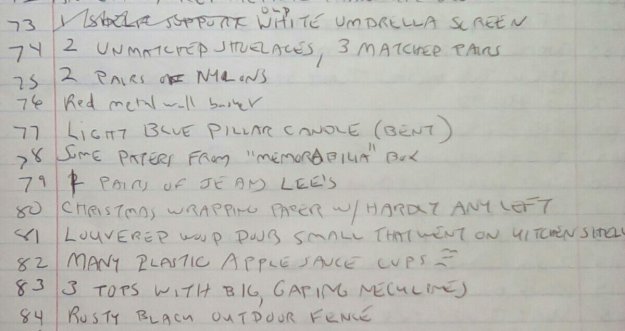 I have not made any Thai food (yet). A Thai-inspired Cole Slaw prompted that goal.i

This wasn’t in the January post but after an unusual year of indulgence of sorts (relative I assure you) I wanted to bring my food spending down. I was prompted to spend less as a goal because the  $2,200 I spent on food in 2018 seemed like a lot and was decidedly more than I’d ever spent. I have markedly cut my food spending in the first 6 months of 2019 but I wonder how much of that owes to the fact I had, I see in retrospect, the equivalent of a small grocery store in my home! I had quite a stockpile going on. You’d think a stash like that would just last & last but no, it seems I ate most of it.😐

In the first six months I spent $766 on food, which, if doubled and divided by 365 is about $4.20 a day. I did this NOT by dieting or going hungry but by eliminating pricier products or prepared foods like the $5 pound of hummus I treated myself to occasionally in 2018. (That hummus is now $5.50 and shouldn’t a home cook like me be making her own hummus anyway?) I bought only fish (frozen or canned) and shellfish, no other animals (which is not to say I never will but as of now have no thought to). Other than Olive and Sesame I haven’t bought any fancy oils, such as the delicious Avocado oil I bought a few times in 2018. I’ve eaten well, nutritiously, and plentifully (I have to for my activity level), no complaints. At this rate, one I’m not sure I’ll maintain, I’d spend $600 less on food this year than last. I’ll be satisfied if I cut it by $300 (more beans, less pasta.😁) and that seems like a realistic or probable savings by year’s end.

The only real indulgence I’ve kept – so far – is an occasional bottle of Kalamata Olives. The point of cutting my food spending isn’t to be a martyr or self-punishing in any respect. I ADORE food and its importance in my life can’t be overstated. It’s to see if I can spend less and still be happy with my food and to get myself to make even more foods at home.

I’ve watched (or watched again) two Marx Brothers films. Who said goals can’t be fun?! I know I need it, more levity, and the Marx Brothers are a sure thing. I have watched A LOT of movies and several series this year but I’m not too concerned so long as nothing more important is short-changed. This is the first time I’ve kept a list; I simply had no idea how many hours I spend watching DVDs and I wanted to know. 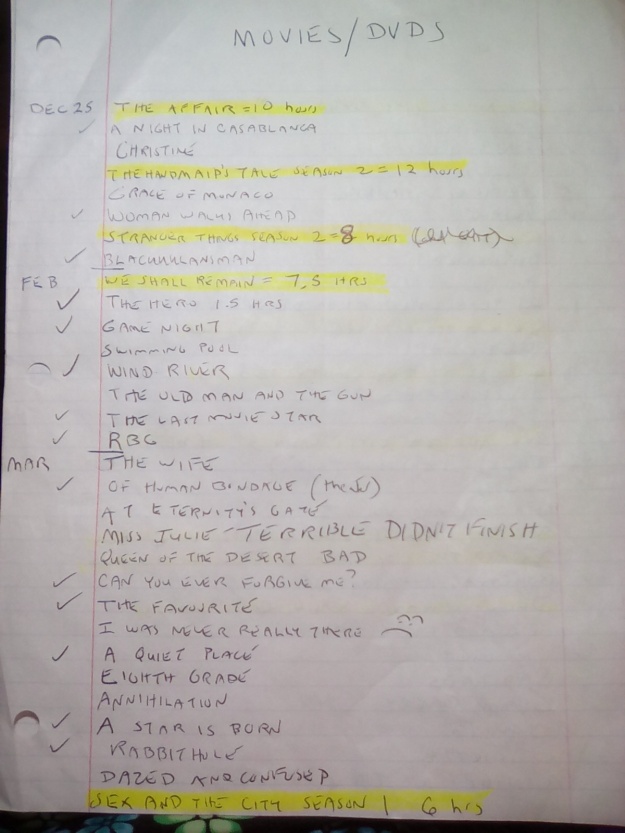 Lastly, I ‘m maintaining my physical health and with the yoga earlier this year, definitely challenging myself. I was pleased to find I kept up with everything the instructors were doing in the DVDs. On other fronts, I haven’t mastered a chin-up or pull-up 😁 – something I’ve mentioned – but I don’t really expect to.