I used to do this when I was a little girl but had forgotten about it. I’d turn my head upside down and imagine how it would be to walk around on the ceiling. I’m sure I was on the floor but if you can bend over, you can do it that way and look at your rooms upside down. It’s still entertaining! Everything is transformed. Look at all that floor space! You’d have to step into the rooms and the windows now almost reach the floor. Overhead lights become pedestal tables. High kitchen cabinets are now conveniently located at your knees. Try it!

Many years ago I came up with a simple design for making tall shelves with doors from scrap wood (and sometimes louvered doors) and I’ve been running with it ever since. Easy, fun to make, and oh-so-useful when space, especially storage, is minimal. I just made upgrades to two I’ve had a long time.

This one is kind of a utility cabinet, tall with shallow shelves that holds household stuff like tape, extension cords and batteries. I’d previously painted this unit wild colors (the shelves were orange) when I had it in another room (holding different stuff) but once I moved it into the main living area, those colors weren’t working. Here’s the new upgrade. 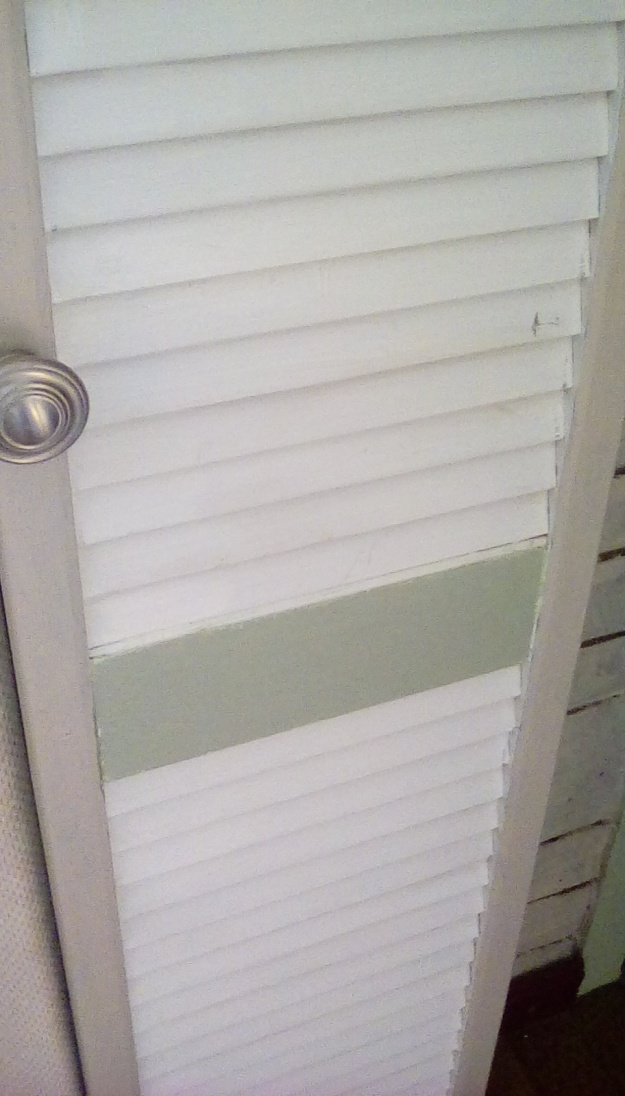 Organized, convenient, and hidden from sight. (Those Bob’s Red Mill boxes that hold 4-packs are handy.)

This next cabinet’s upgrades make me so happy. It has cool doors a neighbor gave me but for many years one of the doors was hanging lower than the other and being the person who made it, well, it bothered me. I knew it wouldn’t be an easy fix because the two end pieces are hollow inside (the screws has shifted and made one of the doors sink lower). I spent some time fooling around with it and got the doors aligned (and hopefully they’ll stay put, at least awhile). Then I needed to move one of the doorknobs since it was now out of alignment with its mate.

I had previously painted the inside of the top panel so it couldn’t be seen through and really liked the light green with the black design. But it was time to go bolder. I painted the lower front of the doors the same sage green as the other cabinet. Because I’d built a small wall-hanging cabinet where these photos had been, they needed a new home. These are all pictures I’ve taken, shown in various yardsale frames. Frankly I’m running out of wall space so the left side was perfect! 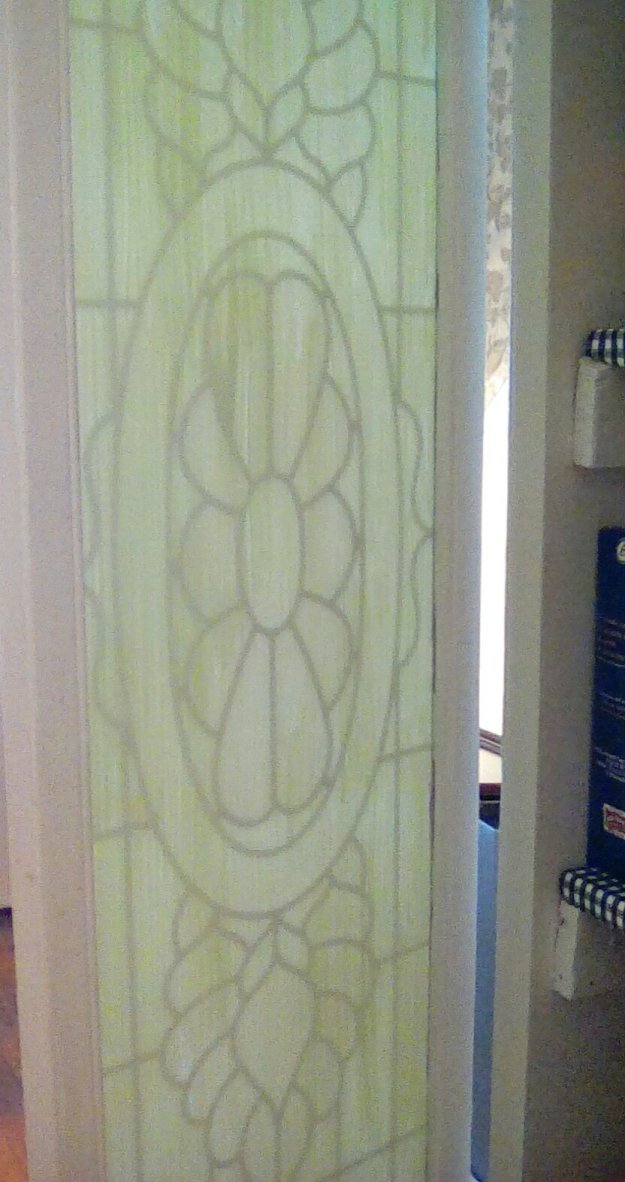 Here’s the painted inside of the door. 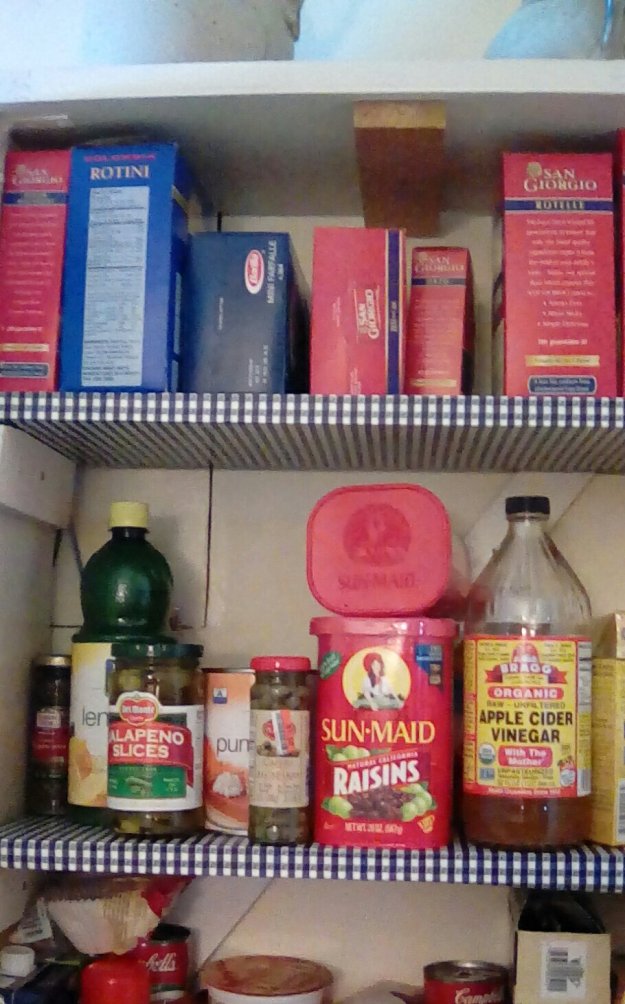 It’s a food pantry – but you’d never know it from the outside. I think that makes it interesting; why can’t food go in something  that looks nice?!

“You mole people sitting around in the dark.”

I used to hear this a lot, a phrase that has been percolating in the back of my head – with many other weird phrases – for decades.

My parents said it to us. Sneered it with disgusted looks on their faces.

Why you ask? Oh let me tell you!

My parents were two generations older than their youngest children, of which I was one. Now that I am in middle age, I think I might understand the impetus for this strange thing they’d say, which just bewildered me back then. They couldn’t see! I don’t mean that literally, but my parents had middle-aged eyes. Middle-aged people have vision issues, one of which is a need for more light. They must have projected their own vision issues onto us, forgetting, as they did in many ways, that a child’s circumstances were not the same as their own, not comprehending or believing that we could see just fine without a lamp.

When I was a kid and would be sitting in a chair or lying on my bed reading, minding my own business, and one or the other of my parents would come along and bark at me about “reading in the dark” and “ruining” my eyes, I didn’t know what they were talking about. They should have been happy as clams, being so electricity-conscious as they were and prone to TURNING OFF LIGHTS to SAVE MONEY, that their young children were saving them money, whole pennies certainly.

I now know about middle-aged vision all too well. I haven’t yet had to go to bi-focals (although I dance around that line) but I do need light. When I read, when I work with tools, do any kind of craftwork, etcetera.

[Get this. After 60 people need 2/3 more light to read by than they did when they were 20. Two-freaking thirds! This information was quoted in the book, “No, I Don’t Want to Join a Book Club!”]

I guess I’m no longer a member of the mole people family. I light the hell out of my world. You can’t walk three feet without running into a lamp. So there.

I am extremely appealing to mosquitoes, especially the wretched Asian Tiger mosquitoes. In summer it’s so bad that if I get close to an open window – even a second floor window – one or two will begin batting furiously against the screen trying to get at me. The other day, I was seated three feet away when out of the corner of my eye I began seeing flickering movement outside. It couldn’t be! Could it? Yes. It was a mosquito, crazed with blood-thirst. It’s like being tracked by The Terminator in a tiny mosquito body. Except there’s hundreds and thousands of them. I’m a marked woman.

Some words just stick with you years later.

I was seeing a smart man with a sense of humor that bordered on absurdist or dark, which I appreciated. His grandmother died and while they weren’t the closest, he was genuinely saddened. He needed to take time off work for the funeral and his employer rather uncharitably gave him a hard time about it, demanding proof. To me he commented dryly, “What, do they want me to bring in a limb?”

Perhaps I too am a bit twisted, but it still gives me a snort.