When I was a kid I first learned how to knit (that’s two long needles) and it was okay. Then, however, I learned how to crochet (one short needle with a funny little hook on the end) and oh baby, that was the one for me! I liked crocheting much better and had aptitude for it. In fact, when I was a teenager my adventures in crocheting peaked with a Grand Champion ribbon at the “County Fair” one year. I made this sweater (don’t ask me how; it looks hard). 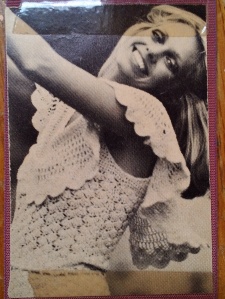 I still have said photo – from a magazine (you didn’t think that was me frolicking happily did you?) – because I cleverly taped it to the back of the winning ribbon to save with keepsakes. The prize came with cash too, but I’ve forgotten how much (but was thrilled with that part). 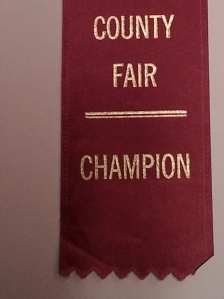 It’s good I have the photo because not long after the fair I unraveled the whole thing – crocheted sweaters made from yarn are really itchy and where was I going to wear this thing anyway? Knowing me, I likely wanted the yarn for something else. Now, if I could go back, I don’t think I’d unravel it, but there you go.

Over time, I made other things, including afghans, for each of my sisters and my mother. I know they liked – and kept – them, but I’m kind of appalled by how many crocheted afghans I see these days languishing at thrift stores and yard sales. Some old Granny’s hard work tossed onto the scrap heap…

My crocheting came to a halt in my late teens soon after I moved out on my own. My time got taken up with other things; the usual fare of work, school, relationships. I really didn’t much see the point of crocheting, especially when clothes and accessories were increasingly less expensive, all the more so at those aforementioned thrift stores. Why crochet a scarf when you could find a perfectly nice one already made for a dollar? Besides, once clothes were eliminated for itchiness, what did I need that could be crocheted?

A couple decades rolled by. I would think of my old hobby from time to time. Maybe, I thought, the point wasn’t the end project so much as the pleasure in the making. I remembered crocheting as fun. Although I finally gave away the last of my yarn, I had never gotten rid of my old crochet hooks, if only out of sentiment. You know they’re old: they’re stamped USA. 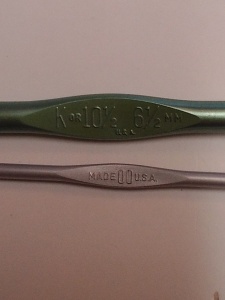 It started to bother me that I’d so totally abandoned a hobby I once enjoyed. In Fall 2013, I found a big stash of yarn for a low price at a church yard sale. I rooted around in a bin that nobody else showed much interest in, and chose these. 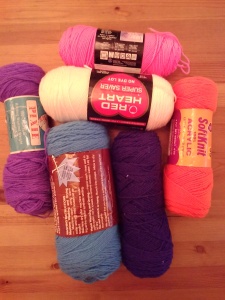 A year rolled past. I wasn’t sure if I knew how to crochet any more, so I thought it’d be a good idea to get a children’s instruction book from the library. I found one in the online catalog and requested it. However, when it came I discovered it wasn’t a book for children, but instead crocheted things to make for children. Oh.

I found instructions for cute leg warmers. But they looked complicated. Naaah. We don’t need no stinkin’ complicated instructions. I decided to make my own leg warmers by winging it. This has become somewhat Vintage Me – why bother with cumbersome instructions when you can make something a lot quicker your own way?

At first I started with the “single crochet” stitch, which makes a tight weave. That was taking forever; didn’t I used to be fast at this? Had I grown so slack?? Then I remembered how much better I always liked the “double crochet” stitch, which creates a looser weave but goes much faster in the making. We were in business. I selected 4 of the yarn colors I had for a repeating pattern and just made it up as I went, occasionally holding them against my leg to decide on sizing, etcetera. It worked! Good enough for me – after all, I wasn’t gunning for “Grand Champion.” 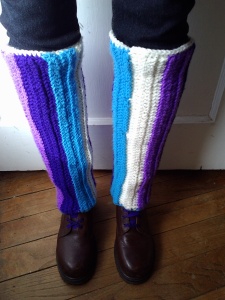 I’ve been looking at leggings, boots, etcetera on Amazon and the models usually pose elaborately. I needed to get in on this. 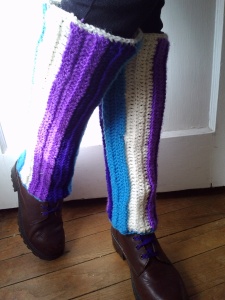 Not only are they cute, but they even function as intended: added warmth over jeans or leggings. Each time I’ve worn them out, a woman has complimented me on them. Not the same woman, I mean different women, which is very nice.